SUBJECT PERIODICALS
Have Schtick, Will Travel

An orthodox rabbi with an unorthodox approach hits the road in a reality TV show meant to treat the discord in America's families. 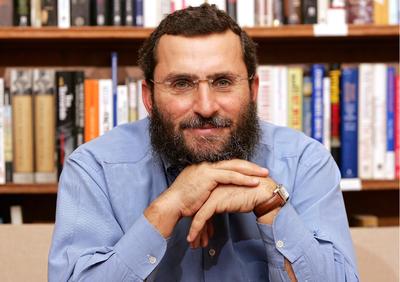 This month, Rabbi Shmuley Boteach becomes a family-adviser-on- the-road hosting a reality TV show, "Shalom in the Home," scheduled for prime-time broadcast on The Learning Channel.

Shmuley (as he likes to be called) is a former rabbi-in-chief at Oxford and the author of 16 books on family and marriage, including his latest, "Ten Conversations You Need to Have With Your Children."

America may not need another show pairing our deepest familial dysfunctions with our obsession for navel-gazing, but it may need a Shmuley showcase. This one -- which has the rabbi touring the country in an Airstream trailer outfitted with video and audio gear to monitor and advise the 10 families he visits -- is compelling not only in its gimmicks but in its host's charisma and ability to identify and deal with deep-seated family woes.

Shmuley points out that he has more than a little experience in these areas. The child of a messy divorce, he says he vowed early on to help other families -- and to live his own life differently. (He's been married for 18 years; his eighth child was born in March, during the final week of the show's taping.)

His rabbinical work has not been without controversy, especially among ultra-orthodox Jews who criticized his popular Oxford L'Chaim Society, a student organization, for recruiting non-Jewish students as members and installing a black non-Jew as its leader. Neither did his frank discussions of sexuality and religion, especially in his book "Kosher Sex," go over well with traditionalists.

A former close relationship with Michael Jackson also raised eyebrows, even among the secular. A friend introduced him to the King of Pop shortly after Jackson left the Jehovah's Witnesses and was spiritually adrift. "Michael Jackson needed a rabbi," explains Shmuley. "He still needs a rabbi or priest."

The 39-year-old Shmuley is more than Dr. Phil with a Hasidic beard. And "Shalom in the Home," he says, is no nanny show about unruly kids: "It's about how Mom and Dad's relationship affects the whole family."

At a Kosher Persian restaurant in Manhattan's Garment District, with Middle Eastern music swirling in the background, Shmuley dined on ghormeh sabzi (a vegetable stew) and talked about the new show and America's ailing families with sensitivity, humor and charm -- attributes that temper a critical and challenging message.

What do you hope to do with the show?
If you fail at being a spouse or parent, you've failed in your most important roles in life. We have to start putting it in such stark terms because we always put those roles on the back burner.

We have a narrow definition of success that is entirely professional. What I'm trying to do in the show is give people a sense of satisfaction, of feeling really heroic when they invest time, energy and attention into their families.

So what ails the American family?
America has little domestic peace. Men and women do not know how to get along. Children don't want to be around their parents, they want to go out with their friends. We have 14-, 15-year-old girls manipulated into bed by boys who don't want them. Women who hate their bodies. Parents hold in their hands the key to their children's self-esteem. But we don't realize what a grave responsibility that is.

Why not?
For men, it's something I call the "broken American male." Your worth is determined by your productivity. Donald Trump is a great success, so is Bill Gates. Two percent of the population is successful. Ninety-eight percent of us are left to feel that our dreams are shattered.

American men live their lives through endless escapes -- destructive escapes like pornography on the Internet, alcoholism, too much TV or being closer to their buddies than they are with their families, or becoming workaholics. Their families can't make them feel good about themselves. They don't take pride in being a father or husband.
American men are not psychologically healthy right now. If you see yourself as a failure, your wife who was stupid enough to marry you is a failure squared.

How about women?
They're dispirited. Three-quarters of divorces in America are initiated by the wives. That's an astonishing statistic. And they are going out into the wild blue yonder! Ninety percent of men who leave their wives leave for another woman. Women are leaving their husbands for nobody!

They would rather be alone than be with him. Because one thing they are not going to do is sacrifice for a man who doesn't appreciate it.

In the first episode, the husband has an affair, wife divorces him, now she's raising four out-of-control kids alone. Fixing that is a tall order. And what happens after the "Shalom" mobile home rolls on to the next dysfunctional clan?
I sum it up in a single word: inspiration. You can inspire people to the mountaintop -- give them a vision of their lives from the high places. Then they have a vision of themselves and what they want to be so I don't have to be there propping them up all the time.
Is that what you did with Luis [the adulterous husband]?

Luis cheated on his wife because what the world told him was great did not accord with what he had become. He was a truck driver. He started going out with his friends to escape, got drunk, met a woman and had an affair.

I had to give him a vision of what he could be -- not some billionaire, but something greater: a man who honors his wife of 18 years. He was living with crippling shame.
I had to establish credibility with Beatriz [his wife] by not letting him blame her for his affair. At the seminal moment, I grabbed him by the shoulders and said, I will not go to your wife and make the case that she take you back unless you promise there is someone you can speak to who will continue to inspire you!

He said he was going to call you. It sounded like he didn't have anyone in his life.
That's the problem. Most of us don't. We find our priests and rabbis boring. Our friends experience the same setbacks. The loss of inspiration is the story of modern American life.

What are the biggest issues compromising the American family?
There are three. Foremost is loveless, passionless marriages. Second is a lack of investment in our children. And the third is the decentralization of the home -- parents are clueless as to how to create a stimulating home environment so that children want to be home.

How does lack of a couple's passion wreck family life?
I'm a great believer in the passionate connection between husband and wife, and for children to witness that passionate connection so that they live passionately.
Marriage should be put before the children. Children will outgrow your love someday. They'll move out and find the love of a stranger. You'll want them to have the memory that love is real because they saw it at home, and to believe they'll find a soul mate instead of dating aimlessly, like we see so much of now.

You're coming at this as an orthodox Jewish rabbi. Do you worry that might narrow the show's appeal?
Not one bit. I've spent my entire career among the most secular people in the world, especially at Oxford. This is not a religious show. This is a mainstream show that happens to have a rabbi as host.

What we all share -- Jew, Muslim, Christian, agnostic, atheist -- is a desire to maximize our human potential. That itself is something spiritual. I try to unearth the inner godly voice that speaks to each of us -- if you are an atheist you call it conscience, if you're religious you call it soul. Part of each of us wants to transcend our human limitations and be more than we are -- more loving, compassionate, embracing.

Do you have specific advice about how we can do that?
It starts with marriage. Marriage dies from loss of desire -- the loss of attraction between husband and wife -- not just physical, but becoming strangers to each other.

I said to her, you've become a mother before being a woman. When a husband begins to perceive his wife's breasts as a cafeteria, it really diminishes the attraction! It was killing the marriage.

I'm a great believer in eroticism in marriage. I asked the husband, does your wife enjoy sex? "She hates sex," he said. I said, "No, she just hates sex with you because you make her feel unattractive."

Now, I'm not interested in predictable, blase solutions. So we set her up for a massage with a gorgeous guy and blindfolded her. Thirty seconds into it, the husband took over and started pushing the boundaries, massaging her in places no reputable masseur should. She let him do everything! When it was over, I asked the husband what that felt like.

It could be!
Well, then [laugh] -- we know men are uni-orgasmic and women are multi-orgasmic. Male sexuality is, to use a loaded word, impotent. The greatest problem with intimacy in marriage is that men lose interest themoment sexual activity has ceased. That's a great disappointment for many women.

So, how can sexual activity breed emotional intimacy? How can you make your wife new to you every single day? When a man tells me his wife is not attractive, what he is saying is that he has lost interest. Other guys have not.

I teach husbands to use a new pair of eyes. Whenever I go someplace with my wife, I train myself to see her through all the other men in that room.

To them, she's brand-new. And I am reminded constantly that my wife is beautiful, and I desire her all over again.

"So what ails the American family? 'America has little domestic peace. Men and women do not know how to get along. Children don't want to be around their parents,'" Shmuley told the author.
CONTACT ME