College programs tailored for adults come in many forms. 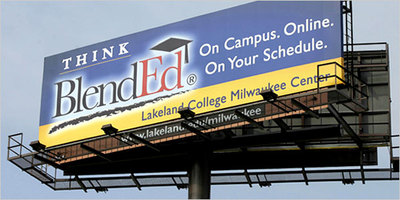 Who said education had to be meted out over 16 weeks, 40 hours a course? After all, the traditional semester was not born of some deep insight into the human learning process; it was just a logical timetable for an agrarian society ordered by harvest times and Christian holidays.

For many of today’s adult students, the semester just doesn’t cut it. It’s too long. Work schedules and childcare obligations can’t be predicted. Campus is too far away.

“For years,” says William J. Husson, vice president for professional studies and strategic alliances at Regis University in Denver, “older adults were excluded from higher education unless they wanted to cram into desks that didn’t fit or take time off from work.”

Now they can have it their way. And with the adult student population accounting for some 40 percent of the higher education market, institutions compete to give it to them. Course length, class schedules, meeting venues, online components — colleges now tweak them all to marry convenience and speed.

Dorothy Durkin, associate dean of the School of Continuing and Professional Studies at New York University, calls these new formats “pain relievers.” The evolving array is rapidly becoming the norm, but whether the new timetables actually do their job remains an open question. Some educators maintain that repackaging a semester’s worth of curriculum into more palatable chunks compromises learning, that an eight-week course is too fast and too intense. Others say compressing the schedule increases the chance that adult students will take and pass classes, and complete a program of study.

In either case, adults going back to school have to make decisions that never occurred to earlier generations: accelerated or compressed, blended or online? And if they can’t decide, there’s a format for that, too.

The Short Course
Accelerated: The term is thrown about liberally but typically means 20 to 32 hours of class time over 4 to 10 weeks.
Compressed: Not to be confused with the above; 40 to 45 hours (the same as a traditional semester) over six to eight weeks. Also called “intensive.”

ADULT learning resembles running the Boston Marathon, says Christopher E. Hopey, dean of the School of Professional and Continuing Studies at Northeastern University. Many may enter, he says, “but when you get to Heartbreak Hill, your legs go out.” To help adults get to the finish line — a degree — he advocates shortening the route and speeding up the pace. Northeastern typically splits the traditional semester in half for about 300 for-credit courses, which are offered eight times a year.

Really in a hurry? Students in Northeastern’s school of education can rack up a full semester’s class time in just five days. New York University, too, offers for-credit courses that last a week in subjects like languages, digital arts and finance.

Some institutions collapse two complementary courses into one. Oakton Community College, in the Chicago suburbs, may combine an English class with one in library science, or a theater course with one in psychology, and bundle them into 16-week or 8-week sessions. That’s credit for two courses in half the time — or, in the second case, a quarter of it.

Mr. Hopey says the strategy, employed at Northeastern for a semester-long Econ I and II combo, eliminates redundancies. And students don’t risk forgetting the fundamentals they learned in the first part while waiting for the second.

But does any of it stick? Research on the effectiveness of various course formats is slim. In two small studies, Raymond Wlodkowski, former director of the Center for the Study of Accelerated Learning at Regis, concluded that adults in accelerated courses learned as well as or better than college-age students in traditional-length courses.

In one study, Dr. Wlodkowski followed 66 adults enrolled in accelerated courses (20 hours over five weeks) at three different colleges and 66 younger students taking the full-length versions (40 hours over 16 weeks). The accelerated and standard courses — in accounting, business law and introductory philosophy — both used identical materials, covered the same ground and were taught by the same instructors. At the end, each set of students was asked to write case-study analyses, which were evaluated by other experts. Scores earned by the adults either matched or exceeded those of the full-term students; when the study was repeated at different colleges, accelerated students did even better.

With age often comes motivation, concentration, self-direction and work experience, Dr. Wlodkowski says. He adds that when those factors are found in a classroom environment, a full semester is usually unnecessary.

Proponents insist that nothing of value is dropped because of the speed; instructors try to run more disciplined classrooms, present material more efficiently and make more pointed assignments. In the Regis studies, instructors reported that 80 percent of the content and methodology of the accelerated classes overlapped with traditional classes. Some class discussion, repetitive activities and practice time were eliminated.

“It brings us back to a fundamental question,” Dr. Wlodkowski says. “What does it take for people to learn something? There is no study in the world that says you learn more after doing, say, two papers on a subject instead of one.”

But critics worry that the speed of these courses promotes haste and cramming and that their content is not as rich. Michael Slavkin, a professor at the University of Southern Indiana and an educational psychology researcher, does not recommend accelerated programs. He says people retain information when it is transferred in meaningful ways — associations must be made; hands-on activities must reinforce learning; discussion and opportunity for reflection must underpin teaching. All that, he says, takes time.

“The brain is flexible, but it’s not a supercomputer,” Dr. Slavkin says. “People need time to think through information. We’re already talking about a population that is rushed and hurried. Frantically trying to get through assignments makes it more difficult for it to be a powerful learning experience.” These courses exist, he says, to exploit a ready audience. They may be “user-friendly,” he says, but do they provide a good education?

In part, that depends on the institution, says Daniel W. Shannon, dean of the Graham School of General Studies at the University of Chicago. “Academic values vary between schools,” he says, and students have differing expectations. Some do want “continuing ed lite,” he says. As a result, adult education remains a buyer-beware industry. The University of Phoenix, a pioneer in accelerated and compressed online degrees for midcareer adults, has been widely criticized for racing students through and for its low graduation rates.

Some subjects, Dr. Shannon says, do not adapt well to an accelerated pace. A compressed language program that runs daily for three weeks in a row could result in a positive learning experience, he says. But truncating a language translation course would be a mistake, he adds, because the course is (or should be) labor intensive.

There are no absolutes about which subjects work best. Those that require repetitive exercises, like science courses with lab work or math, demand much from students on a shortened schedule. And teaching such courses can be challenging as well. As for literature and survey courses, their heavy reading and writing loads usually require the processing time of a traditional semester.

The most popular accelerated programs are in business, education and health care, because so many adults return to school to build their careers in these areas. In such well-defined fields, the curriculums work because they are career-specific; often, they are based on industry needs or business training models that have trickled into higher ed.

COLLEGES continue to experiment. Some alternate on-site and online lessons; some hold classes completely online. At Lakeland College, which has several centers around Wisconsin, you don’t have to decide: courses are held in a classroom as well as online — and you can attend either way on any given day without even telling the instructor in advance.

In something Lakeland calls BlendEd, students can do the lesson via the Internet (through a text seminar and online chat) or show up for class. About half usually do attend in person. Lakeland offers some 680 courses this way. The program, three years old, has cut attrition by 25 percent among students in its Kellett School of Adult Education. Students like it, says Stephen Gould, president of Lakeland, because they can stay home with sick children and still attend class, or log in from distant points while traveling on business.

How much Web-based learning to add to your course schedule? Research supports having at least some. The University of Central Florida in Orlando started tracking performance in face-to-face, blended and online courses 12 years ago. From 1997 to 2003, researchers looked at the “success rates” (defined as a grade of C or better) of more than 100,000 students. They found that grades in the blended courses were comparable to and sometimes better than those in the other two formats.

Another study, published in the Journal of Asynchronous Learning Networks, concluded that classes held solely online produced the most benefit. Dr. Slavkin’s team at the University of Southern Indiana followed more than 400 students in six semesters of introductory courses in educational psychology and health care delivery systems. The same instructors taught the courses three different ways and found that students taking the courses online earned higher grades than those in both the traditional and blended classes.

Frank Mayadas, program director for the Alfred P. Sloan Foundation, which awards grants to colleges developing online learning, says many students learn better when they can review lessons and engage the material online, especially if they are intimidated by classroom participation. But the format can also prove frustrating to the technologically challenged.

Dr. Slavkin says that online classes can confuse students who have poor organizational and technical skills and punish those with difficulties in written communication, given the frequent requirement for e-mailing and chatting with instructor and classmates.

But the programs provide new possibilities. A “low-residency” degree program in law-firm management at George Washington University, for example, draws students from firms around the country; they travel to campus for brief periods of intense instruction, then complete the bulk of the work online. It kicks off with a nine-day on-site class that meets every day, including weekends, from 9 a.m. to 6 p.m. Students get about 60 hours of class time and eat most meals together. Then they complete four months of online coursework from home. The program ends on campus, with a four-day residency.

The Days of Rest
Weekend University: Programs offered Friday night, Saturday and Sunday.
The name says it all. For those too busy or tired during the week, there are even more opportunities to go to school.

Entire programs are tailored to the weekend. The Weekend University at the New Jersey Institute of Technology offers several degree programs, including a bachelor’s in information technology and a master’s in engineering management. Students meet Friday evenings or Saturdays for an hour and a half for 15 weeks; another hour and a half of class is completed online. Many of the courses are clustered into 24-credit professional certificates earned along the way.

While the Weekend U. may be the new night school, Mr. Hopey says that Northeastern dropped such classes after a survey placed weekend courses “at the bottom of the bottom” of preferred activities. “Maybe it’s because people have great weekend opportunities in Boston,” he says.

In contrast, at the University of Pennsylvania, where he was vice dean of education, “We’d run one of those things, and 1,000 people would show up.”

"Adults going back to school have to make decisions that never occurred to earlier generations: accelerated or compressed, blended or online? If they can’t decide, there’s a format for that, too."
CONTACT ME