SUBJECT PERIODICALS
So You Want to Work for a Nonprofit?

How a casualty of Bear Stearns traded Wall Street for the do-good life. 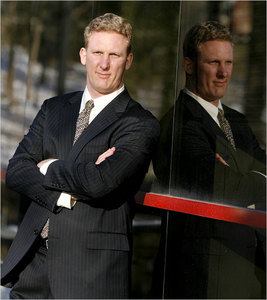 Profiteer to Philanthropist,T Kip Schaefer’s transformation began by going back to school for his master's.

On Friday, March 14, 2008, Kip Schaefer was at his job at Bear Stearns, fielding call after call from agitated investors who, in one cataclysmic day, canceled billions of dollars in trades, creating a run on the nation’s fifth-largest investment bank and shuttering it by weekend’s end. Mr. Schaefer, who worked at the firm for 12 years, likened the trauma of that day to the death of a family member.

It may have paled compared to the 11 months that followed. In that time he: lost his job, had a third child, sold two homes, went on 20 job interviews, completed a master’s degree in fund-raising from New York University, moved his family to a new town, bought and renovated a home, and started a new career.

“I don’t know all of the top stressors in life,” he says, laughing as he remembers cold sweats in the middle of the night. “But I think we lived through most of them last year.”

You would never know it by looking at him now at his new job as director of institutional business development at the National Philanthropic Trust, just outside Philadelphia. Lunching at a bistro at Rittenhouse Square — a short train ride from the trust’s headquarters in Jenkintown, Pa. — Mr. Schaefer, 34, seems relaxed and amiable. With close-cropped hair and an earnest gaze, he exudes the easy charm of the college athlete he used to be, and betrays his Northern California roots and psychology degree with the new-agey lingo he uses to explain his “transformation” from profiteer to philanthropist.

The “key takeaway” from his year of professional limbo? “Align your intuitive spirit with your career goals,” he says. It may also help, as Mr. Schaefer’s experience shows, to do that psychic check-in before you lose your job.

Mr. Schaefer’s intuition and do-good drive led him to a cutting-edge not-for-profit, National Philanthropic Trust, which specializes in “donor advised funds.” These are charities usually rooted in personal passion — scholarships at alma maters, money for a local museum — that are administered by a third party. For a fee, the trust takes care of accounting, taxes, advising, grant-making and liquidating assets used to finance the charities. The idea has been around since the 1930s but gained in popularity during the last decade’s flush times as the number of retiring boomers and millionaires multiplied.

The National Philanthropic Trust, which started in 1996, had managed a total of $1.5 billion in charitable assets and was looking to grow. Its president, Eileen Heisman, sits on the advisory board of the George H. Heyman Jr. Center for Philanthropy and Fundraising at N.Y.U. She was introduced to Mr. Schaefer through one of his professors.He had the Wall Street connections Ms. Heisman wanted to cultivate, but it was his education in fund-raising, his passion for “mission-related” work, and his personality that clinched the offer.

“He had already educated himself, that was key,” she says. But what she also saw in him was sincerity. “It’s a harder leap than people think,” she says of the transition from profit to nonprofit. “Some come to nonprofits thinking there’s not much to know. They think they’re doing me a favor coming from the private sector: ‘Oh, a charity. How hard can this be? I’m finally ready to give back!’ Kip wasn’t like that.”

Kip Schaefer got in, though, “just before the bottom fell out,” she says. With fortunes tied to the stock market, the assets the trust currently manages are down 20 percent. Nonprofits everywhere are taking a hit and are expected to stall even more with President Obama’s proposed reduction in tax breaks for charitable donations. Some nonprofits have already closed or are cutting staff. The trust downsized in December.

“It was a tough decision,” she says. She kept her new employee, with his promise of attracting new business.

Mr. Schaefer thinks a good instinct about career direction landed him his job in a tanking economy. Feeling “incomplete” with a bachelor’s from the University of North Carolina, Chapel Hill, he heeded “an intuitive call” to further his education in 2006. It was the exposure to massive wealth and what Mr. Schaefer calls the “philanthropic culture embedded” at Bear Stearns (senior managers were required to give away 4 percent of their mega-salaries to charity) that got him thinking about a different kind of money management.

He was not looking for a career change immediately. He hoped to move into senior management at Bear Stearns and to serve on the boards of charitable organizations. (In 2007, he did, joining the Friends of the Children of New York, a mentoring program in Harlem.) His “after Wall Street plan” was to work in philanthropy, perhaps internationally, using his knowledge of the global financial markets.

“I never saw myself sitting on a pile of cash at the end of my career,” he says. “I expected to look back and say, ‘Look how great I impacted the world.’ ”

Mr. Schaefer was one of the original students in N.Y.U.’s Master of Science program in fund-raising, offered at the School of Continuing and Professional Studies. Academic training in nonprofit work is relatively new, fueled by the recent growth in philanthropy. In the last decade, the number of nonprofit groups has increased nearly 40 percent, to 1.4 million organizations, raising $306 billion in 2007 alone.

Thirty programs around the country grant master’s degrees in nonprofit study, allowing students to specialize in areas like management or fund-raising. Another 130 programs offer concentrations within other disciplines, such as public administration, social work or business. Indiana University has a Ph.D. in philanthropic studies and expects to offer the first bachelor’s degree in the subject this fall.
“There’s a lot to learn,” says Naomi Levine, the executive director of the Heyman Center, who created N.Y.U.’s master’s three years ago. “This isn’t selling Girl Scout cookies.”

Mr. Schaefer took two courses per semester — each met one night a week — and one course each summer. He finished in just over two years. With 10 hours of homework a week, a full-time job, two young children and a third on the way, he didn’t have time for anything else. The last two semesters were a particular challenge. The weekend of Bear Stearns’s collapse ended when JPMorgan Chase bought it. Mr. Schaefer was asked to stay on through the transition until August. He was given a year’s severance.

In between classes and closing out his career there, he put his personal life in order. He sold his apartment on the Upper West Side and his home in the Catskills to stay liquid should he have to relocate. He lived with his family in the Catskills home in a leaseback while crisscrossing the country for interviews in the financial and charitable fields. Some days, he says of the job hunt, were not easy: “My wife gave me a good visual. Imagine walking through a blizzard. If you stop, you’re going to freeze and die. You’ve got to keep walking. You’ll walk out of it.”

By September, he had. When the trust’s offer came, he was also weighing a more lucrative deal from a financial firm. The offer from the trust, he says, wasslightly less than his $175,000 Wall Street salary, which had been supplemented by a bonus three times that amount. Executive pay in the nonprofit sector can’t compete with Wall Street compensation, not even in these days of slashed bonuses, but it can be comparable to executive salaries in the for-profit world.

He did a gut check.

“I followed my passion,” he says. Given the dire condition of the economy when he finally started at the trust in February, it seems a good thing he did. “If I hadn’t,” he says, “I’d probably be chasing my tail right now looking for work.”

"The 'key takeaway' from his year of professional limbo? 'Align your intuitive spirit with your career goals,' he says. It may also help to do that psychic check-in before you lose your job."
CONTACT ME