SUBJECT PERIODICALS
Teaching the Teachers: Those Who Can, and Can't

In some ways, today's new teachers resemble their graying counterparts. In others, they are quite different. 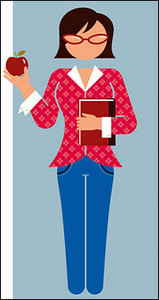 In the last five years, 500,000 new teachers have taken jobs in the nation's elementary and secondary school classrooms. In the next five, a half million more will be needed as the student population swells and aging boomers accelerate their march to retirement. In some ways -- by gender, race, idealism -- today's new teachers resemble their graying counterparts. In others, they are quite different.

FEMALE
Teachers are still primarily women -- 75 percent in all. But many talented women now look elsewhere for careers. A new study by the University of Maryland shows that the likelihood that a high-performing female student will become a teacher fell to 11 percent in 2000 from 21 percent in 1964. Today's women and minorities have career options that pay better (average public school salary: $46,752), treat them better and are held in higher social esteem. In 1968, 26 percent of college freshmen indicated an intention to go into teaching. Today, that number is 10 percent.

WHITE
Despite a slight uptick, the number of minority teachers is still disproportionately low: 84 percent of all teachers are white, 8 percent black, 6 percent Hispanic and 1.6 percent Asian. At the same time, 40 percent of public school students are minorities.

ALTRUISTIC
Like the retiring population, which was trained during the civil rights and Vietnam War years, teachers with five years' experience or less are motivated by a desire to make a difference in society and to influence children positively, according to a 2000 survey by Public Agenda. Only one in 10 fell into teaching by chance; 96 percent say teaching is something they love to do.

NOT STICKING WITH THE JOB
Fourteen percent of teachers leave the profession in their first year and 46 percent by the fifth year, a 2003 study by the National Commission on Teaching and America's Future found. The problem is partly generational, says Kate Walsh, president of the National Council on Teacher Quality: ''Twenty-somethings are not staying in any profession.'' But also, new teachers often find themselves in the most demanding work environments, ones that teachers with more seniority leave. Unprepared and unrewarded, even highly motivated teachers look elsewhere, says Caroline Hoxby, a professor of economics at Harvard.

BELOW-AVERAGE STUDENTS
Teaching attracts a ''disproportionately high number of candidates from the lower end of the distribution of academic ability,'' says a report last year from the National Council on Teacher Quality. In 2004, the average combined SAT score for college-bound seniors was 1,026; the average for those who intended to major in education was 965. (Only home economics, public affairs and technical and vocational scores were lower.)

That measure is controversial: Jane Leibbrand of the National Council for the Accreditation of Teacher Education says it does not take into account students who want to teach secondary education but who major in an academic subject. Those students have among the highest SAT scores. While college-bound seniors going into elementary education -- more than half the teaching force -- typically come from the bottom quartile of their class and have the lowest scores, those who intend to teach and major in language or literature, for example, had an average score of 1,150 last year. And those who have passed licensing tests like the Praxis II, used in 80 percent of states to measure knowledge of the subject area they intend to teach, also scored higher on the SAT -- 1,029 in 1997.

CAREER CHANGERS
Post-baccalaureate and midcareer changers are teaching's biggest trend. Some 200,000 of these teachers have entered the profession since 1985 -- about 70,000 of them in the last two years, according to the National Center for Education Information. Their number is expected to grow, especially to fill shortages in math, science, foreign language and special education. Forty-seven states and the District of Columbia have created 122 alternative routes to teacher certification in recent years.

With an average age of 35 and seven to eight years' experience in another profession, this new breed brings marketplace attitudes to teaching and presents a challenge to the status quo, says Susan Moore Johnson, a professor at Harvard Graduate School of Education. Their expectations include a collaborative approach to change, differentiated workplace roles (classroom teacher, curriculum development, outreach duties) and performance-based pay. ''Schools are not organized for this type of individual or for the things they are seeking,'' Ms. Johnson says.

C. Emily Feistritzer, president of the National Center for Education Information, calls the shift to an older teaching population historic -- and an antidote to teaching's ''youth problem.'' ''These teachers are mature, see the value of education, intend to stay longer in the job and think all kids can learn,'' she says.

"College-bound seniors going into elementary education - more than half the teaching force - typically come from the bottom quartile of their class and have the lowest SAT scores."
CONTACT ME