A New Jersey elementary school principal takes on the state and reforms her school. 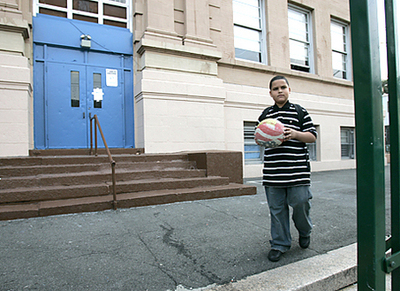 'Educational child abuse." That's how a top New Jersey official characterized the Jersey City schools in 1989, on the eve of the state's takeover of the district. Such a hostile move was unprecedented; no state had ever disbanded a locally elected school board to seize complete control of a district. But New Jersey's lawmakers and bureaucrats declared such drastic action their last, best hope to reverse years of corruption, mismanagement, and miseducation of the city's 32,000 students.

Brazen as the Jersey City takeover seemed, state officials had only just begun: In 1991, New Jersey took over Paterson; four years later, they went into Newark. Nationwide, states soon made similar power plays in cities across the country. Eleven states assumed control of low-performing districts in the 1990s; 22 more passed laws that allow them to do so. Still others eschewed takeovers but put urban schools under tight rein, issuing dictums on everything from curriculum to class size.

No one is more familiar with the many implications of state-prescribed school reform than Lynn Liptak, principal of the K-8 School #2 in Paterson. Shortly after the state took over Paterson's schools, Liptak was called in to turn around the ailing #2. She has since introduced a host of cutting-edge reforms and earned a reputation as a top leader. But School #2, as Liptak readily admits, has a ways to go. A decade after states began taking charge of city schools, the school is a perfect example of how the problems of urban education can resist cookie-cutter solutions.

In many ways, #2 is a prototypical urban school. "We are as inner-city as you can get," explains Liptak. "We draw students from a women's shelter, a center for ill and disabled parents, and a teen center." Driving in downtown Paterson, you get the picture: Main Street is lined with unkempt storefronts-the Latin Bar Restaurant, Casa Elegante Furniture, Lucky 7 Bail Bond-gated across their windows and doors to deter vandalism. The birthplace of the Industrial Revolution, poet Allen Ginsberg, and comedian Lou Costello, Paterson once thrived as a silk mill town. Today, it is part of the rust belt.

Liptak, 51, is tall and fair with a quiet but steeled manner about her. Last winter, she completed her doctorate in education at Columbia University-another milestone in a career that began more than 25 years ago in her hometown of Los Angeles, where she taught 1st grade before moving to New Jersey in 1972. In Paterson, she taught bilingual 3rd grade (she is fluent in Spanish) and then moved onto the district's administrative track. She served as principal of two other K-4 schools before taking her current post.

School #2 is a sprawling, three-story brick structure, part of which dates to 1871. (Founded in 1856, #2 is one of the oldest public schools in the country.) Bouncing from one end of it to another, Liptak is in perpetual motion and demand. She has 37 classrooms, 745 students, and some 100 staffers to keep up with.

The school swirls with noise and activity-and competing interests. Seventy-five percent of the students are Hispanic, 13 percent African American, and 12 percent Bengali. Liptak is committed to teaching her bilingual students-30 percent of the enrollment-in both English and their native language, which means #2 is home to one of the country's few Bengali-speaking teachers. There is a special class for autistic kids; a kindergarten for the neurologically impaired; three kindergarten classes with students from elsewhere in the district; and a 2nd grade class experimenting with an audio system designed to help learning disabled students.

Even Liptak's office offers little respite from the school's bustle. Staff walk in and out to use her private bathroom. The phone rings constantly, and it's startlingly loud. Through it all, Liptak seems a reservoir of calm, though she admits to feeling "spread thin."

"The Paterson school district is frenetic," says Patricia Wang-Iverson, a senior associate with the Mid-Atlantic Eisenhower Consortium of Research for Better Schools who also works as a math consultant at School #2. "Lynn is a gentle individual. You look at her and wonder, Gosh, how can someone like that run a school? But I think she's a remarkable individual with a big picture and, with her doctorate, is a model for lifelong learning. What she does through her personality is provide stability and calm that is needed. She treats her staff and students with respect."

When the state took over Paterson, School #2 was declared one of New Jersey's worst. Though a dubious distinction, it freed Liptak to recast the school with outside help. She seized the opportunity, partnering with Columbia University to map out plans for reform. It was the beginning, she says, of "building a community of inquiry together. I never had anything like that in my career- that chance to say, 'OK, this school can redesign itself, and with the promise that the central office will go with whatever we determine to be the redesign.'"

Liptak has built on this view of reform over the years at School #2. Whereas she once instituted change with answers already in hand, her MO is now rooted in experimentation and what she calls "grappling with questions." Soon after coming to #2, for example, Liptak wrestled with a question that plagues many city schools: How do you prepare kids to excel in math so they can increase their chances of attending college? The principal and her school management team knew that kids who don't take algebra and geometry in high school-particularly poor students-are not likely to go to college.

Having identified this key concern, Liptak researched math programs and adopted a curriculum developed by the University of Chicago that uses everyday experiences to teach kids problem- solving. "The math project is one that I thought of as the acupuncture of school reform-you find a critical place and insert the needle very deeply," Liptak says.

In many of her reform initiatives, Liptak has brought in education groups and consultants to work side by side with her teachers. "The outside experts coming in and telling us what to do has not really worked for us," she says. Many of these partnerships have led to groundbreaking work. Thanks to a collaboration with the federally funded Eisenhower Consortium, for example, School #2 built lesson plans based on a study of videotapes from the Third International Math and Science Study. Wang-Iverson says the school is one of the few in the country to recognize the possibilities for professional development in the TIMSS tapes.

Liptak has installed each of her reforms with the state's mandates in mind, although the state hasn't always been on top of her changes. Nor would it necessarily have approved of them all. A year after arriving at the school, for example, she put in place the reading portion of Robert Slavin's Success for All program-a "whole school" reform that the state recently ordered for hundreds of city schools. "We were kind of ahead of the curve," she says modestly, then adds, ironically, "The state called me earlier this year and congratulated me on selecting Success for All. I'd been using it for six years."

Liptak's quiet sarcasm illustrates the tension in her relationship with the state: As she tries to engineer change within #2, the state is managing the Sisyphean task of directing reform in hundreds of schools. As a result, the two sometimes don't see eye to eye. Recently, she and her management team proposed in their budget to split #2 into three smaller schools. The state rejected the idea because it did not fit the Success for All scheme. "Whatever was not part of Success for All was taken out," she says. "So you say, Well, why did we do the budget?"

Liptak admits that she has had to duck the state at times to do what she thinks is best. Before implementing the Chicago math curriculum, she considered seeking the state's approval, but then thought better of it. "They say it's better to beg forgiveness than to ask permission," she says. "We just thought, Well, if we ask and they say no, we're stuck with the same old, same old."

But ultimately, she fears that the state has a fixed definition of reform that hampers learning by tying the hands of teachers and principals. "They're assuming a deficit model, that we can't think and construct some ideas ourselves. If they try to bypass the minds of the practitioners in the field, it's not going to work. That's a way to go from poor to average, but not from average to truly high achievement for kids."

Complaints like this are common in districts where states are in charge. To their credit, states in the decade after the Jersey City takeover have moved into chaotic school systems and repaired buildings, streamlined finances, and generally restored the order necessary for kids to learn. But they've been far less successful at improving academic performance. This summer, for example, the state returned control of Jersey City's schools to the district, even though achievement and attendance rates remain virtually unchanged from 1989.

"When the state took over Paterson, School #2 was declared one of New Jersey's worst. Though a dubious distinction, it freed Liptak to recast the school with outside help."
CONTACT ME