Betty Friedan will go down in history for launching the modern women’s movement, but in real life she was just as imperfect as most people. 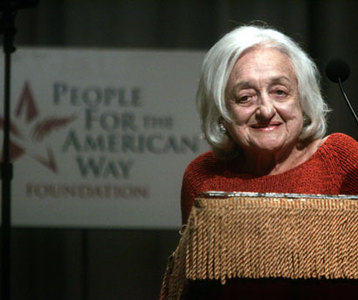 My first conversation with Betty Friedan—a phone interview for a job as her assistant—started like this: “This is Betty Friedan. Are you a feminist?”

She laughed. “Yes! But I am not politically correct!”

I discovered that firsthand.

I worked for Friedan—author of The Feminine Mystique and mother of the modern women’s movement—for about a year in 1996. She was a visiting professor at DC’s Mount Vernon College, where I was teaching mass media.The assistant before me had quit in tears. Betty didn’t need an assistant so much as she needed someone to keep her anxieties in check.

She concluded our next interview—this one face-to-face—by saying, “I think we can work together. You’ll see I’m really not such a monster.”

Betty was teaching feminist theory at Mount Vernon—at the time a women’s college, now part of George Washington University. The class’s level of thinking drove her crazy. She ranted about the messages they took away from the revolution she had begun.

“Who told them not to get married?” she’d shout. “Who said they shouldn’t have children?”

By then, she was out of step with “feminism” herself, opposed to what she saw as the movement’s antimale rhetoric, its de-emphasis on family and focus on lesbian issues.

I had moved to Washington two years before when my husband got a job here. I’d left my position as a magazine editor in New York, baby in tow. I knew three people in DC, had no professional connections, and soon got pregnant again.

For years I’d been a single professional. I was 33 when I married, 36 when I had my first child. The women’s movement had made it possible to postpone marriage and motherhood. I wasn’t always happy as a working woman, but neither was I as a stay-at-home mom. I had no idea how to integrate the two. On the verge of becoming a Feminine Mystique train wreck, I went back to work.

When the head of my department at Mount Vernon suggested the job with Betty, I was intrigued. “I admire her,” I said.

But the Friedan mystique was at odds with the workaday Betty.

“Where’s the car?” she shouted when the car service I’d ordered was late. “Don’t they know I’m Betty Friedan?”

It was tiring being around her. But there was a righteousness, a hard-edged sweetness, to her. She also had an awareness of her shortcomings that—if you looked beyond the sometimes bad behavior—made her vulnerable.

I grew to like her; she grew maternal toward me. “We need to get you better household help,” she said when I had a childcare breakdown. When a professor tried to load me up with work, she unloaded on him: “What are you trying to do to my Cecilia?”

One of the last jobs I did for Betty was to edit an article she’d written for the New Yorker, a rambling treatise on the “paradigm shift” in the women’s movement. She’d had a hard time with it, and it didn’t end up running in its original form.

She invited me to her DC apartment to go over it. She was wheezing and moved slowly. We talked about the article, and she vented her frustration: “Does it sound like Betty Friedan and not like this mess sitting in front of you?”

It didn’t sound like “Betty Friedan.” But she didn’t seem like a mess, either. She seemed like countless other women I knew who were trying to make sense of their roles and what their lives had become.

Betty Friedan had launched the revolution that was supposed to give us answers. Thirty years later, she seemed as bewildered as the rest of us.

“I think we can work together. You’ll see I’m really not such a monster,” Friedan told the author.
CONTACT ME