SUBJECT PERIODICALS
So You Want to be a Teacher for America

How a 50-year-old banker turned relentless determination into relentless pursuit. 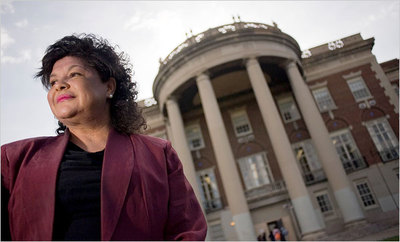 At 50, Paula Lopez Crespin doesn’t fit the Teach for America demographic of high-achieving college senior. The program rarely draws adults eligible for AARP membership. In fact, just 2 percent of recruits are over 30.

But what Ms. Crespin lacks in youth, she makes up for in optimism, idealism and what those in Teach for America call “relentless pursuit of results.” Ms. Crespin beat out tens of thousands of applicants to get where she is: fresh off her first year teaching math and science at Cole Arts and Science Academy in a gang-riddled section of Denver.

Many friends thought she was crazy to give up a career in banking for a $32,000 pay cut teaching in an urban elementary school. But the real insanity, Ms. Crespin insists, would have been remaining in a job she “just couldn’t stomach anymore,” and surrendering a dream of doing “something meaningful with my life.”

These days, crazy never looked so normal. Teaching has always been a top choice for a second career. Of the 60,000 new teachers hired last year, more than half came from another line of work, according to the National Center for Education Information. Most bypassed traditional teacher education (for career changers, a two-year master’s degree) for fast-track programs like Teach for America. But unemployment, actual or feared, is now causing professionals who dismissed teaching early on to think better of its security, flexibility (summers off, the chance to be home with children) and pension. Four of Ms. Crespin’s colleagues at Cole are career changers, ages 46 to 54, including a former information technology executive and a psychologist.

Teach for America, the teacher-training program that has evolved into a Peace Corps alternative for a generation bred on public service, is highly competitive and becoming more so: this year, a record 35,178 applied — a 42 percent increase over 2008 — to fill 4,100 slots. Eleven percent of all new Ivy League graduates applied.

Teach for America is a young person’s game. But that perception may be shifting. Applications from career changers and graduate students grew 81 percent last year, and T.F.A. has established an “emerging markets team” to recruit professionals one to five years out of college.

“Age is not a factor,” says Grant Besser, who heads the team. But intent and resolve are. “At the end of the day, we’re trying to identify leaders and high-achievers committed to education reform,” he continues. Those farther along in their first careers, he adds, may have a “longer-term view” when considering an education calling. That’s important for an effort in which about 40 percent leave after fulfilling their T.F.A. commitment of two years in a needy school. Seasoned professionals like Ms. Crespin might help improve that retention rate by bringing self-knowledge, work ethic and tested ideals to the job. “For a lot of professionals, joining T.F.A. is a way to put their idealism into action,” Mr. Besser says.

Such was the case with Ms. Crespin. She tried to leave banking once before, but after several months of substitute teaching, and unsuccessful attempts to connect with another fast-track program, Ms. Crespin went back to financial marketing. “I felt like I was going nowhere,” she says.

Then her daughter, at the time a senior at the University of Colorado, announced that she was applying to Teach for America. Ms. Crespin was opposed to the idea. She worried that her daughter would be placed in a dangerous school with little preparation or support. But when Ms. Crespin visited her daughter in her classroom, “that was the ‘wow!’ moment for me,” she says, adding: “I was sitting in the back and wanted to wave to her, but she was in a zone, in command. She was the best teacher I had ever seen.”
Ms. Crespin was inspired to apply to the program herself.

The application process is labor-intensive. T.F.A. doesn’t want the half-hearted. During her initial telephone interview, Ms. Crespin worried that the screener thought job boredom motivated her desire to teach. “How much more honest can I be?” she recalls saying. “I want to change careers. This is not a résumé builder.”

With coaching from her daughter, she made it through to the next level, a day of group discussion, role playing and a sample lesson (hers was on the civil rights movement) at a Denver hotel. In one-on-one interviews, candidates are asked scripted questions and ranked exceptional to poor in categories based on T.F.A.’s core values: relentless pursuit of results, respect for low-income students, ability to motivate, critical thinking skills, perseverance and accomplishments. The questions are designed to elicit patterns of achievement and leadership in academics, sports, organizations and life experience. Ratings are entered into a computer model, which spits out a score. Officials are looking for those who “spike” in the exceptional range.

Ms. Crespin scored high in relentless pursuit, in her sense of possibility and in her respect for students, says Sean VanBerschot, the executive director in Denver. “Paula perseveres, sets goals,” he says. “Nothing gets in her way.”

A “dark-skinned Latina” who grew up in a largely white neighborhood, Ms. Crespin says she knows about overcoming obstacles. She earned her degree part time at Regis University in Denver while raising two children. She started in banking as a teller, moving up to vice president of marketing. Last summer, Ms. Crespin was assigned to five weeks of training with other recruits at T.F.A.’s Houston “institute,” one of seven around the country. She wasn’t the oldest in her cohort; a 62-year-old former telephone company employee beat her out.

Each day started at 6 a.m. and ended at 2 a.m. Recruits were bused to schools in the morning to teach. Back at the dorm, they wrote lesson plans and reflected on their teaching. Classes on instructional methods were held at night.

Critics say the training is too crammed to adequately prepare new teachers. T.F.A. has tried to respond. Ms. Crespin has follow-up training, including strategy workshops twice a month and in-class advisers, as needed, who evaluate teachers and suggest improvements. Donna Foote calls T.F.A. a “well-oiled machine.” Her book, “Relentless Pursuit: A Year in the Trenches With Teach for America,” just out in paperback, follows four corps members through their first year at a Los Angeles high school. Officials, Ms. Foote says, pay attention to what, and who, works out, feeding data points into recruitment and training models each year to refine selection and training.
By the end of her institute training, Ms. Crespin says, she felt prepared. She would need to be.

Cole Arts and Science Academy is a new school, housed in a formerly abandoned building. The middle school that was once there had been shut for poor performance. Last year, the district closed two failing elementary schools in the largely Mexican and African-American community, and merged them into Cole. It would have been a chaotic beginning for any teacher.

Ms. Crespin and her 23-year-old Teach for America co-teacher (there are five in the school) have 37 students. She teaches math and science to fourth graders in the morning and to third graders in the afternoon. Her partner takes the opposite schedule with reading and writing. Ms. Crespin works 60 to 65 hours a week. To complete licensing requirements, she also continues her own education through T.F.A. courses that count toward a master’s in pedagogy of urban education, which she is pursuing at the University of Colorado.

Her husband recently switched careers himself, completing a master’s in social work. To support their new careers, they have dipped into 401(k)’s, refinanced their home and forgone vacations, new cars and restaurant dining. “It hasn’t really bothered us,” she says. “We are happier than we were.”

When interviewed midyear, Ms. Crespin was upbeat about her classroom. By the end of the year, she sounded wearier. She struggles with absenteeism, uninvolved parents and poverty. She takes breakfast bars to feed students who are “ravenous.” These realities make it difficult to reach academic benchmarks. But she says her students’ problems make her “more protective” of them, and more committed. For her, teaching is an “emotional investment.”

Given her age and where she is in her life, with her son about to leave for college and a husband who shares her values, it is one she can manage. She cautions those with competing life demands or romantic notions about urban teaching as a second career.
“This is beyond what you get paid for,” she says. “You have to really want to make change, or you’ll regret it quickly.”

"To support her new career, she has dipped into 401(k)'s, refinanced her home, and foregone vacations, new cars and restaurant dining. 'We are happier than we were,' she says."
CONTACT ME