Veterans learn to write the words they could not speak. 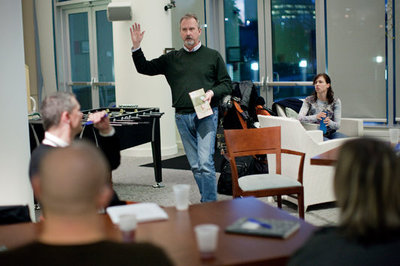 RON CAPPS sat alone in a truck in a Darfur desert preparing to shoot himself in the head. He had been in the military for 22 years, serving in the Army and working for the Foreign Service in the world’s hot spots, including Afghanistan, Iraq, Kosovo, Sudan and Rwanda. He’d debriefed Iranian terrorists held in Iraq, observed rebel forces and assessed the carnage they’d left behind in Sudan, counted the mass graves of the hundred thousand killed in the civil war in Zaire — and reported all back to Washington. After five wars in 10 years, Mr. Capps had developed post-traumatic stress disorder, and it was killing him.

But that day in Darfur, his cellphone rang, startling him, and pulling him “back from the brink.”

“Hello?” I answered. The static on the phone cleared up.

I paused. I certainly couldn’t answer with the truth.

Mr. Capps wrote those lines in 2009 in an essay he entitled “Back From the Brink: War, Suicide and PTSD.” He was 51, retired and an M.F.A. student at Johns Hopkins, where he used writing to make sense of his war experiences and to manage his trauma. After a particularly inspiring class, he decided to “give away” what he was learning in his graduate courses by helping other veterans transition back to civilian life. Today, the nonprofit he created, the Veterans Writing Project, provides free workshops, some in conjunction with George Washington University and some with the National Endowment for the Arts, and publishes a journal of veterans’ writing called O-Dark-Thirty.

The Veterans Writing Project is one of several organizations — including Warrior Writers, based in Philadelphia; New York University’s Veterans Writing Workshop; and the Syracuse Veterans’ Writing Group — that have cropped up over the last few years with similar missions. This tradition of healing through words goes back to World War II, when a women’s service group brought workshops to veterans in V.A. hospitals, first in Chicago and then spreading to other facilities around the country. The group still operates today out of Mission, Kan., and publishes the journal Veterans’ Voices.

The writing workshops are open to veterans of any war, but the service members returning from Iraq and Afghanistan are the ones who are “changing the conversation,” says Travis L. Martin, 28, an Iraq veteran and editor of The Journal of Military Experience, a collection of short stories, poems and artwork created by student veterans, which he started at Eastern Kentucky University in 2011.

“The traditional therapies and approaches to PTSD are not getting the job done,” he says. “Vets are looking for alternative ways to heal, and they are latching onto writing as a way to do it.”

Thanks in part to generous G.I. Bill benefits, Mr. Martin’s first sustained experience back in civilian society happened at a college campus, but he had PTSD, and he had trouble. He created his own regimen of bibliotherapy to deal with avoidance issues and stress. At Eastern Kentucky, administrators turned to him for suggestions for curing poor veteran retention rates: “What worked for me, I told them, was writing.” Mr. Martin completed bachelor’s and master’s degrees in English at Eastern Kentucky and is now at work on his Ph.D. at the University of Kentucky. The second volume of The Journal of Military Experience, published in 2012, reached beyond the university to include veterans from all over the United States.

For a generation weaned in a multimedia confessional society, and at ease with blogging and Facebook, it makes sense that sharing war experiences and fears would be an effective, or at least familiar, way to examine and overcome what Mr. Capps describes as the “powerful sense of isolation” that greets most veterans once home. They leave behind a culture built on teamwork for one that doesn’t seem to value community, doesn’t appear to be at war and doesn’t understand them.

Psychologists know that writing is therapeutic. Expressive writing is used in clinical settings to help patients examine anxieties and abuse that are otherwise unspeakable. Exposure therapy — retelling a traumatic event over and over until it loses its hold over a patient — often uses writing to extinguish the emotional and physical reaction to trauma.

“My experience,” Mr. Martin says, “is that traumatic memories are fragmented. They appear in flashes of intensity, but not always in order.” The brain must process trauma. But service members don’t get that chance before they are shipped off again, only to experience more distress.

The result, Mr. Martin says, is anger, depression, anxiety and fear. “If you can put those emotions and the traumatic event in a narrative that makes sense to you,” he says, “it makes the trauma tangible. If it is tangible, it is malleable. And if it is malleable, you can do something with it.”

The military is looking to writing and other art forms, like painting and music, to help rewire the brain after trauma. At Walter Reed National Military Medical Center in Bethesda, Md., Ron Capps leads weekly workshops for service members recovering from PTSD and traumatic brain injury. He starts them off with two fundamental questions: What is different about the military experience, and why do we bother writing things down?

Paraphrasing Oliver Wendell Holmes, who served in the infantry in the Civil War, he adds, “We have a responsibility to bring back a report to those who’ve sent us out.”

Kate Hoit, 28, had been writing a memoir — stories about war, lost friends, alcoholic parents — when she joined Mr. Capps’s first workshop, at George Washington University in 2011. The workshops, which run 6 to 14 weeks, are meant to be both a healing experience and an opportunity to create art. Mr. Capps asks participants to step away from their war experiences and observe the details in new ways. They talk about character development, narrative structure and point of view.

Ms. Hoit received critiques from other veterans; she trusted their reactions. She had recently graduated from the University at Albany, where she studied journalism. She was no stranger to sharing her writing, but had found civilian classrooms awkward and frustrating. She had felt judged for her subject matter.

Even now, as a student in Johns Hopkins’s M.F.A. program, she finds herself battling stereotypes. After one reading, a classmate asked her, “Why would anyone join the military if they didn’t want to kill someone?” She is angry about the “media-shaped” portrayal of the wars and feels a responsibility to “reshape that picture and ground it into truth.”

“It’s like people think the only people who join the military are poor or lesbians,” she says.

Or stupid, chimes in Alex Horton on a joint phone call from the Department of Veterans Affairs, where he and Ms. Hoit work. Mr. Horton, a 27-year-old junior at Georgetown University, recalls a class in which students — “kids with perfect scores” and little life experience — voiced the belief that an all-volunteer army was a security risk because it attracts a disadvantaged socioeconomic class. “I stood up and said, ‘Wait a minute! There are hundreds of veterans here on campus as smart or smarter than you,’ ” he said. “These are the people who will be at State and the Department of Defense, and this is what they think the military is like.”

In veterans’ circles, Mr. Horton is known for Army of Dude, the blog he began while in Iraq in 2006-7. It is imperative, he says, that the stories of the current wars be written and disseminated, especially on college campuses, where future decision makers are clustered. “Ron’s model is important,” he says. Mr. Horton took part in a workshop at George Washington University conducted by Mr. Capps, who is also developing an undergraduate course on war writing for the university, tentatively for the fall.

At Eastern Kentucky, Mr. Martin teaches a veterans-only course that mixes expressive writing with practical advice on navigating college. The writing component is not mandatory. Neither does he ask that students read stories out loud. He’s not sure the class can handle the emotions they stir. He’s not sure he can. “I’m still going through my own stuff,” he says. He works with students one on one, going through as many as six drafts.

Most of the stories, he says, are about “trauma, trauma, trauma, trauma”: a marine whose friend is killed by a sniper; a convoy ambushed in Iraq; the smell of burning bodies in a firebombed bus; a mass grave site in Bosnia and a girl from it who makes recurring appearances in a veteran’s dreams.

“These guys are putting out some pretty hard-core stuff,” he says.

Micah Owen, who had served with Mr. Martin in the same unit in Iraq, was a student in his class. He finished two years at Eastern Kentucky before moving to Oregon, where he has family and works on the production line at GloryBee Foods.

Mr. Owen, who is 30 and has PTSD, says he has trouble talking about his war experience, but he discovered he has no trouble writing about it.

“I was struggling to stay on top of things,” he says. “Travis knew I had to talk about things, but that it was easier to put it down on paper. Once the words started coming, I couldn’t stop them.”

Mr. Owen’s story for the class — his first attempt at writing, beyond song lyrics — is a dramatic account of his convoy being ambushed in Fallujah. It was published in the first volume of Mr. Martin’s Journal of Military Experience, and it was the first time Mr. Owen’s family had heard about his military service. “I hardly ever spoke about it with them,” he says. “This was a way for my family to know what I had done.”

After reading the story, his mother cried. Mr. Owen urged his father, a Vietnam veteran, to write down the experiences he had never spoken of. At first his father balked. But in the second volume of the journal, there are two Owen essays, one by father and one by son.