SUBJECT PERIODICALS
The World Is Their Workplace 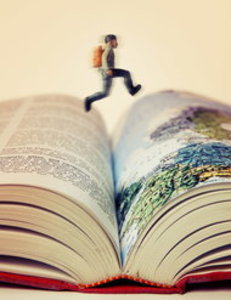 IT’S the kind of job a business major might dream about: marketing executive for a Fortune 500 medical supplies company.

After a year of stateside training, Andrew Gamertsfelder, 23, will head for São Paulo, Brazil, in June to cover South America for Stryker Orthopaedics — a position, he says, that perfectly fits his academic training and the international work experience that came with it.

Mr. Gamertsfelder, who graduated from the University of Pittsburgh last spring, was one of the first students to take part in Pittsburgh’s International Internship Program. He took four weeks of prep, including a course in Portuguese, followed by a 10-week full-time internship in the marketing department of Dow Chemical in São Paulo. That internship led to another at the United States Embassy in Brazil that he arranged independently. And that led to the job at Stryker.

Mr. Gamertsfelder’s success is exactly what J. P. Matychak, director of career services for the business school, was hoping for when he began the program three years ago. He saw that employers placed a premium on international experience, but the study-abroad students he counseled were unable to articulate how their programs prepared them for global work.

And so he upended the traditional study-abroad experience, as many colleges have done. He made work the focus of the summer program, which this year is open to the School of Arts and Sciences. “We put internships at the foundation and academics on the perimeter,” he says.

Such a focus might make a liberal arts dean shudder, but these are different times. International internships are growing. In 2000-1, 7,000 students traveled abroad for work and college credit. In 2010-11, the number was 16,400, with another 8,700 working without credit, according to the Institute of International Education.

Students want to study abroad (a record 274,000 did so for credit last year), but they also know that in a soft job market and increasingly global economy, they need an international work record and the connections that can bring. Study abroad may no longer be enough to make them stand out, nor does it shed light on a country’s business culture. Work-study abroad does double duty.

It would be hard to find a college today that does not have some version of a for-credit international internship, or the means to find one. Boston University has been at it since 1984, its offerings booming in the past decade. Of the 2,550 B.U. students who studied abroad last year, 66 percent took part in an internship in one of 27 countries. Syracuse University’s destinations include Dubai, Beijing and Hong Kong. The University of Pennsylvania has a partnership in Botswana and India among other countries.
Workplaces range from multinational corporations (Pricewaterhouse Coopers) to government (British Parliament) to scientific laboratories (European Organization for Nuclear Research) to not-for-profit groups (International Organization for Migration).
International work-study is most common in business schools. Jonathan Doh, an associate professor of business at Villanova and director of the Center for Global Leadership, tells students to start early and intern often — at home or abroad. Promising freshmen are invited to take part in the Global Citizens Program, which includes a yearlong course geared toward understanding business practices in either London or Singapore, where they spend 10 weeks in classes (15 credits) and 6 weeks at a full-time internship (3 credits) during their second semester.

Jay Tighe, a senior economics and international business major, worked and studied in London as a freshman in the program. He is interested in nongovernmental organizations and did his internship in London with AfricaRecruit, a nonprofit group where his responsibilities included calling African Embassies around the world in a campaign to encourage professionals to return to the continent to help rebuild after political upheaval.

Getting London “under my belt,” he says, gave him confidence. “The logical progression was to do it again.” Which he did, in the fall of his junior year in Argentina, where he worked at a community center teaching English. He has applied for a Fulbright to teach English in Thailand after he graduates this spring.

FOR the most part, international internships are not paid. But students do pay. Tuition and housing is usually equivalent to on-campus charges, but extras can add up. For London, Villanova estimates $7,700 in fees (meals, airfare, local transportation, books, passport, visa costs, health insurance and about $2,500 in spending money), in addition to $21,000 covering housing and tuition for 18 credits. Pittsburgh charges about $9,000, including housing, for its six-credit summer program but gives the first 70 enrolled students a $1,600 scholarship. It estimates $3,500 more in expenses.

Baruch College, part of the City University of New York, provides every international intern with a scholarship that covers airfare. “Baruch is a city school and the young men and women here are not wealthy,” says Terrence Martell, the director of the Weissmann Center for International Business, which sends about 30 students abroad each summer. Baruch’s students, he says, come from immigrant communities and have the language skills and cultural understanding that appeal to international employers. It’s important, he says, to help them “leverage” that background. But Baruch does not offer credit, or supplemental academics. It works with about a dozen companies that design and administer internships, vetting workplaces and matching students with potential employers.

These types of companies are widely used by students whose campuses do not have their own program or the kind of program a student is looking for — or, increasingly, by unemployed recent graduates who want to build their résumés. One such company, Intrax, out of San Francisco, can help students identify placements, apply for their internships and oversee them once abroad. For a package that includes housing, local excursions and fees like visa processing and insurance (but not meals or airfare), Intrax charges independent students between $5,950, for a semester’s internship in Chile or China, and $8,150 for a post in London.

Dr. Martell cautions independent students to research companies carefully, not only for cost but also for program oversight and solid track records in placing students with reputable companies in meaningful jobs. Internship-only programs do not confer credit, but companies may be able to help students work with schools to arrange it.

Although internships abroad can be pricey, students are taking the long view. “It used to be that a company would train you and then transfer you overseas,” says Melanie Vuynovich, a spokeswoman for Intrax. “Students who intern overseas are doing it because they need it. Often global understanding indicates maturity.”

That maturity was thrust upon Mr. Gamertsfelder. Dow managers included him in market-research trips to Chile, Peru and Brazil. He sat through marketing meetings and was expected to ask customer-relations questions, in English and, at first, halting Portuguese. He then wrote up his findings for management in so-called SWOT reports, as in “strength, weakness, opportunity and threat.”

“That gave me a firsthand perspective on what Dow was doing and where the market was going,” he said. He became fluent in Portuguese, mostly by socializing with Brazilians, listening to music and television, and through Facebook chats. Bitten by the international bug, he also did two Semesters at Sea, financing much of his travels with scholarships. “With the amount of experience I had in Brazil and abroad, and my achievements at Pitt, I figured it would be hard for Stryker to find anyone else who was better qualified.”

'Students want to study abroad, but they also know that in a soft job market and increasingly global economy, they need an international work record and the connections that can bring.'
CONTACT ME