Perceived as too progressive, A.P. History takes a right turn and ends up in the middle. 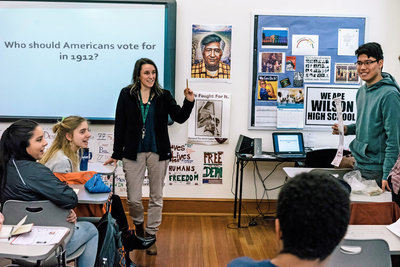 Michele Bollinger works with her high school students on a mock election at Woodrow Wilson High School in Washington, D.C.

On May 6, more than 470,000 students will sit for the Advanced Placement test in United States history. The exam distills 525 years of American history into 55 multiple-choice questions and six short and long essay questions. Much rides on the test beyond the potential for a high score. Events covered and questions asked will convey to impressionable, high-achieving high school students (and future national leaders) what is important, how to interpret it and, ultimately, how to feel about their country.

Shockingly, few are complaining about the exam or the latest framework for teaching the course. At least not loudly.

That’s a sharp contrast from the sturm und drang surrounding the College Board’s introduction of the 2014 framework, the first major overhaul of the course in 60 years. That revision was meant to address teacher complaints that the previous framework was thin and lacked direction, especially on what to focus on for the exam.

The framework grew from nine pages of course guidelines to 115, and incorporated a contemporary approach to teaching history: It moved away from rote memorization and introduced “historical thinking skills,” encouraging the use of primary documents and chronological reasoning to examine events and figures in the context of their own period as well as their influence on and connection to other periods.

But change comes hard, and perhaps it was the College Board’s bad luck to ambitiously update a course so potentially political in an acridly partisan and culturally divided time. The framework quickly became a hot-button issue. Conservatives called foul on a range of inclusions and omissions and a perceived left-wing bias infused with identity politics and anti-American sentiment.

Where was John Winthrop’s “City Upon a Hill” speech? Or Thomas Jefferson and other founding fathers? Why give more prominence to Chief Little Turtle than to Ben Franklin? Granted, a reference to the “established colonial elites” who fueled the “independence movement” had been written in. And any history teacher, the history teachers say, would know who was in that group and how to teach about them.

But even liberals scratched their heads over a few descriptions, like calling Ronald Reagan “bellicose” in his dealings with the Soviet Union or describing Manifest Destiny as a belief in “white racial superiority” without also explaining its philosophical mission to spread liberty, democracy and technical innovations.

Larry Krieger, a retired A.P. teacher in U.S. history and now an exam coach and textbook author (many on how to ace A.P. exams), led the charge against the 2014 framework with a single-spaced 18-page critique. “It was poorly written, poorly organized and poorly balanced,” Mr. Krieger says. Jane Robbins, a senior fellow at the American Principles Project, picked up on his ideas, arguing that the framework had been “scrubbed of American exceptionalism.”

“What we saw was a progressive outlook,” Ms. Robbins says. “It was a non-American, globalist perspective on a lot of issues. We were one country among many, and not a very good one at that. It was a depressing, slanted view of American history.”

Mr. Krieger and Ms. Robbins took their message around the country, persuading legislators in Texas, Georgia, Oklahoma and other states to try to change the course narrative or prohibit schools from teaching it. They even got the attention of the Republican National Committee, which demanded that the framework be delayed and rewritten, and that Congress withhold funding from the College Board.

In Jefferson County, Colo., school board members proposed a committee to review content and teaching materials to make sure they “promote citizenship and patriotism,” “present positive aspects of the United States and its heritage” and do not “encourage or condone civil disorder, social strife or disregard of the law.”

The effort was not always received warmly. Hundreds of Jefferson County students and teachers made national headlines by walking out of classes to protest attempts to “censor” the course.

“I’ve never believed in leaving out the tragic information in our story,” says Stephanie Rossi, an A.P. history teacher at Wheat Ridge High School in Jefferson who vocally opposed the school board. But, she added, “It’s not our goal to make America look bad. America is a work in progress.”

The backlash resounded in other parts of the country, even prompting class discussions on First Amendment rights and government censorship.

“Why should Lynne Cheney get to tell me what I teach in my classroom?” says Michele Bollinger, who teaches the course at Woodrow Wilson High School in Washington, D.C. “It was a little perplexing for those of us in a liberal East Coast school.”

Robert Geremia, another Woodrow Wilson history teacher, says he freely discusses L.G.B.T.Q. issues in lessons on civil rights; his students connected that to free speech questions raised by the challenges in Colorado and elsewhere. “My students said to me: ‘Mr. Geremia, we don’t think you’d be able to teach in some of those schools.’ ”

Some parents and students were angry for practical reasons. Having A.P. courses on a high school transcript can provide an edge in college admissions, and high scores on the exam can earn college credit. U.S. history is the second most popular A.P. course.

Ultimately, the Jefferson County school board heeded public pressure and canceled its review of the framework. Other efforts similarly deflated. But the ruckus caused College Board officials to scrutinize the framework and the exam. After an initially defensive posture, they conceded that critics had valid concerns. Or maybe they decided that intransigence was not good business strategy given its flagging SAT flagship and today’s political climate.

College Board officials reached out to critics, held meetings, attended hearings and listened. They rewrote and reorganized the curriculum, ridding it of partisan sentiment, real or imagined.

What emerged was a framework praised for achieving “an impressive middle ground,” says Jeremy A. Stern, a historian who had criticized the 2014 framework in an article for the Thomas B. Fordham Institute. Critics appreciated being heard. “It was exactly the intellectual and pedagogical process I’d like to see more of,” says Frederick M. Hess, director of education-policy studies at the American Enterprise Institute.

“We don’t see this as a narrative of ‘2014 got it wrong’ and ‘2015 got it right,’ ” says Trevor Packer, College Board senior vice president in charge of Advanced Placement. “We had some problems, and we addressed those problems.” The enormous amount of feedback on the framework was “heartening.”

Still, it may continue to cause the College Board heartburn. Not everyone is satisfied, to be sure.

Peter Wood, president of the National Association of Scholars, says the “tenor is still problematic.” Ms. Robbins remains unhappy with what she calls the “College Board mind-set.” She wants a competitor, as do some of the legislators from the framework fight.

“The framework is driving the curriculum too much,” says State Senator William T. Ligon Jr. of Georgia, who sponsored a resolution, still pending, to defund and withdraw the course from schools in his state. Mr. Ligon says that he “appreciates” the “superficial revisions” of the framework but that the College Board needs to “back off” so states can have more input into what’s taught in their schools. “The problem is that one group has so much influence over what the best and the brightest are learning. We’re waiting to see if there is an alternative.”

He may have a long wait. As Mr. Krieger points out, there is an “extraordinary infrastructure” around the A.P. that would be difficult to replicate. And, as the revision drama demonstrates, creating a quality product is challenging, at best. Perhaps the most obvious question: If A.P. were susceptible to competition, why hasn’t the ACT, which successfully created an alternative to the SAT, jumped in? (The International Baccalaureate, a diploma program, comes closest.)

The hardest hurdle for critics may be accepting that the teaching of history has evolved, as has the sophistication of the high school students who are eager to take on a college-level course.

Michael Kazin, a professor of history at Georgetown University, says that by the time students get to his survey classes, most realize that history is a constant partisan debate about how to interpret conflicts in America’s past, and they are weary of the polarizing “master narratives” of Lynne Cheney versus Howard Zinn. “They’re asking, ‘Why do we have to choose?’”

In the 19th and 20th centuries, “history was taught as a patriotic exercise,” adds Jon Butler, professor emeritus of American studies, history and religious studies at Yale, who was asked by the College Board to weigh in on what he calls some of the “weirdness” in the framework.

Today, history is, or should be, “taught as a subject to understand the past,” he says. “America emerged out of many contentious issues. If we understand those issues, we can figure out how to move forward in the present. That’s patriotism.”
He believes that teaching history requires the same skills as those used in teaching sciences like microbiology.

“How do we address questions of the past? It’s like looking at a cell. What is a cell? How does it function? What is racism? How did it work? How did well-meaning people get it so wrong?”

The current framework is not perfect. Liberals and conservatives can agree on that. But how could it be, encompassing five centuries of American history and walking a balance beam of regional, political and pedagogical needs?

In the classroom, where it counts the most, a majority of teachers (85 percent, according to a College Board poll) said the 2014 framework was “the right approach” to the course. Many saw the 2015 framework as a better-organized, politically corrected version.
Neither, though, corrected a major teacher complaint: The course, because it covers so much ground in a single year, “is a mile wide and an inch deep,” as Ms. Bollinger describes it. Yet teachers are expected, she says, to boil it down for the all-important exam, a difficult task.

Mainly the brouhaha over the framework pushed her into an unexpected alliance with a testing company that teachers, students, parents and conservatives love to hate.
“I found myself,” she says, “awkwardly defending the College Board.”

"Perhaps it was the College Board's bad luck to ambitiously update a course so potentially political in an acridly partisan and culturally divided time."
CONTACT ME